Great news today, as we have officially met and surpassed our goal for this campaign! Thank you so much to all of you who have taken part in this effort! Your support really means everything, and we are so excited to finally get "Men of Steel" out there in both digital AND CD format!

So what happens now? Well, the campaign will continue as originally intended until Dec. 1. After that date, the campaign will end and there will be no further way to order the album on CD for a bit. We want to make sure the crowdfunding participants get it first. I personally get annoyed when I take part in a crowdfunding campaign and the product ends up in a store or online before I get it, so we don't want that happening here.

In the meantime, we will move ahead with getting the CD manufactured and ready for online release. One unfortunate issue that's arisen that we didn't expect, something that could delay things a bit, is the fact that the man mastering the album, Nigel Walton, has been ill and is, as I write this, in the hospital. Nigel has been battling a bigger illness for awhile, and he's had some complications that he's needed to get sorted out. Obviously we value his health first and foremost, so we hope he is better soon. He has already mastered 6 of the tracks on the album, so there are only 3 more to go. Honestly, we weren't expecting to meet our goal so quickly, so in the grand scheme of things, we're still ahead of schedule. Just please send some good vibes Nigel's way. He's a great guy who's been incredibly helpful throughout this project.

For those who've purchased things like meet and greets, recorded songs and appearances on the podcast, we'll be contacting you soon (if we haven't already) to get those details figured out. I'm already learning a few songs that I'll be recording this weekend for some pledgers, which will be fun.

Anyway, thanks again so much for the support on this. We're really proud of this album and we're very humbled by the interest in it. We hope it lives up to everyone's expectations. Won't be long now!

We've had a great first week, and we want to thank you guys so much for the support. As I write this, we are just a little more than $1,000 away from our goal, which is fantastic. Again, thank you.

At the moment, we're still in the mastering stage of the album. A guy named Nigel Walton is mastering it for us. He did the last Skids album, and he's worked with many great artists over the years. You can read his credits here.

We've got 5 of the 9 tracks mastered, and they're sounding great. Very hard-edged, big sound. Our buddy Tim Eldred is currently working on the final art for the CD digipak we're releasing, so we're just about there as well. In short, things are ahead of schedule at the moment. The sooner we can reach our goal, the sooner we can get production going. We're still going to leave the campaign running for the full 30 days, but we're hoping we will be able to get the CDs out a little sooner than expected. Can't promise it, but it's looking good at the moment.

We want to make sure everyone who pledged gets the CD and download before it's fully released. I personally hate it when I take part in a crowdfunding campaign and the CD ends up released before I even receive it. We don't want that happening here.

Everyone who's pledged for a package that includes demos and the Bruce & Jamie and Tom albums should've received those links already. If you haven't, please let us know at watsonkerchevalwatson@gmail.com.

We've heard some nice comments about the demos, so thanks for that. There are a lot of interesting tracks there, some of better quality than others, but it will hopefully be interesting to hear how a lot of the songs progressed once you hear the final album.

Those of you who ordered Perk 5 should get the download links for "Another Anthem" by Bruce and Jamie and "Rail" and "We Were Here" by me within the next day. Please let us know if you have any issues with that.

Also, you may have noticed we don't have a running tally on this page of our goal progress, which you'll see on most crowdfunding sites. That's because this site, Bandzoogle, doesn't take any money at all from the total bands raise, which is great for us. However, since they take no percentage of what we raise, they also don't go out of their way to offer some of those cool tools other crowdfunding sites have that show everyone up-to-the-second totals of how the goal is progressing. So, if you're interested in keeping track, I'll be updating the page every day or so with the most current totals.

We really feel great about the first day, and thanks to you all for that! Hopefully the campaign won't fizzle out too quickly, as these things tend to do, so if you can continue to spread the word, we'd appreciate it. There are a ton of BC fans out there who we think would really love this music. We'll be releasing new content every few days as well to keep the interest going.

Anyway, thanks again to everyone! Day 2 awaits!

Welcome to the Campaign! 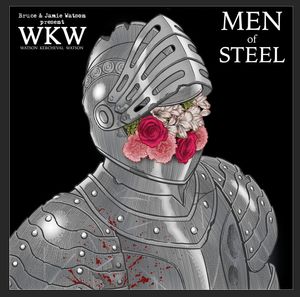 Thanks to everyone in advance for supporting our "Men of Steel" CD campaign. This is our first update post, but we'll be adding more as the campaign gets going.

As mentioned on the home page, our goal for this campaign is $7,000. That will cover the following:

1. Mastering of the tracks (they will be mastered for both CD and iTunes by Nigel Walton)
2. Artwork creation (Tim Eldred has done some great work for us, and we'd like to pay him for his time and talent)
3. CD manufacturing/replication
4. Shipping costs

Unlike some other crowdfunding pages, this one (Bandzoogle) doesn't offer a running, up-to-the-second tally of how much has been raised, so we'll need to keep you updated on that here in this blog with regular posts.

Also, upon making a pledge, you should receive a thank-you message with the password for the "All-Access" page as well as the download link for "Killiecrankie". There will be some cool additional content that we'll be posting there throughout the campaign: videos, images, audio, lots of fun stuff. There're already a few cool things there, and more will be added in the coming days.

Finally, please help us reach our goal by sharing the page, commenting on the music on social media (as long as you like it, of course), whatever you see fit.

Thanks so much for being a part of this effort and this music! Stay tuned for more updates soon!